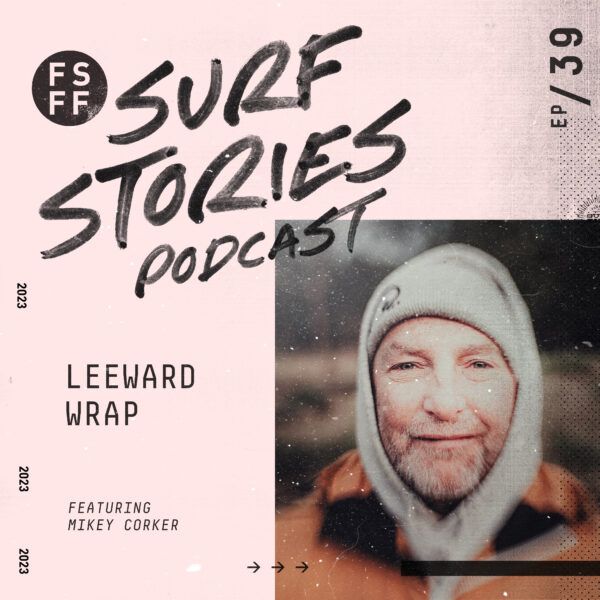 “Sending it” on a wave could be a good analogy for the outstanding feature film director Mikey Corker just finished. It’s called Savage Waters, and his DIY career leading up to this exemplary work of documenting adventure and exploration is personified by the tone and grit we hear in this interview. The patience required to time an unknown wave in the Savage Islands, sold to the boat captain in an 1891 treasure hunting book, is the stuff of well, movies…. Take a listen to Mikey’s journey from grunt gigs to director to Savage Waters.

Find our Surf Stories Podcast where ever you listen.  Or try here.

New Smyrna Beach, FL – As we kick off the tenth year of the Florida Surf Film Festival, we are proud to announce the first quarter programming coming up February 4th at the Atlantic Center for the Arts in New Smyrna Beach, Florida.  Check out our annual Green Room Membership. 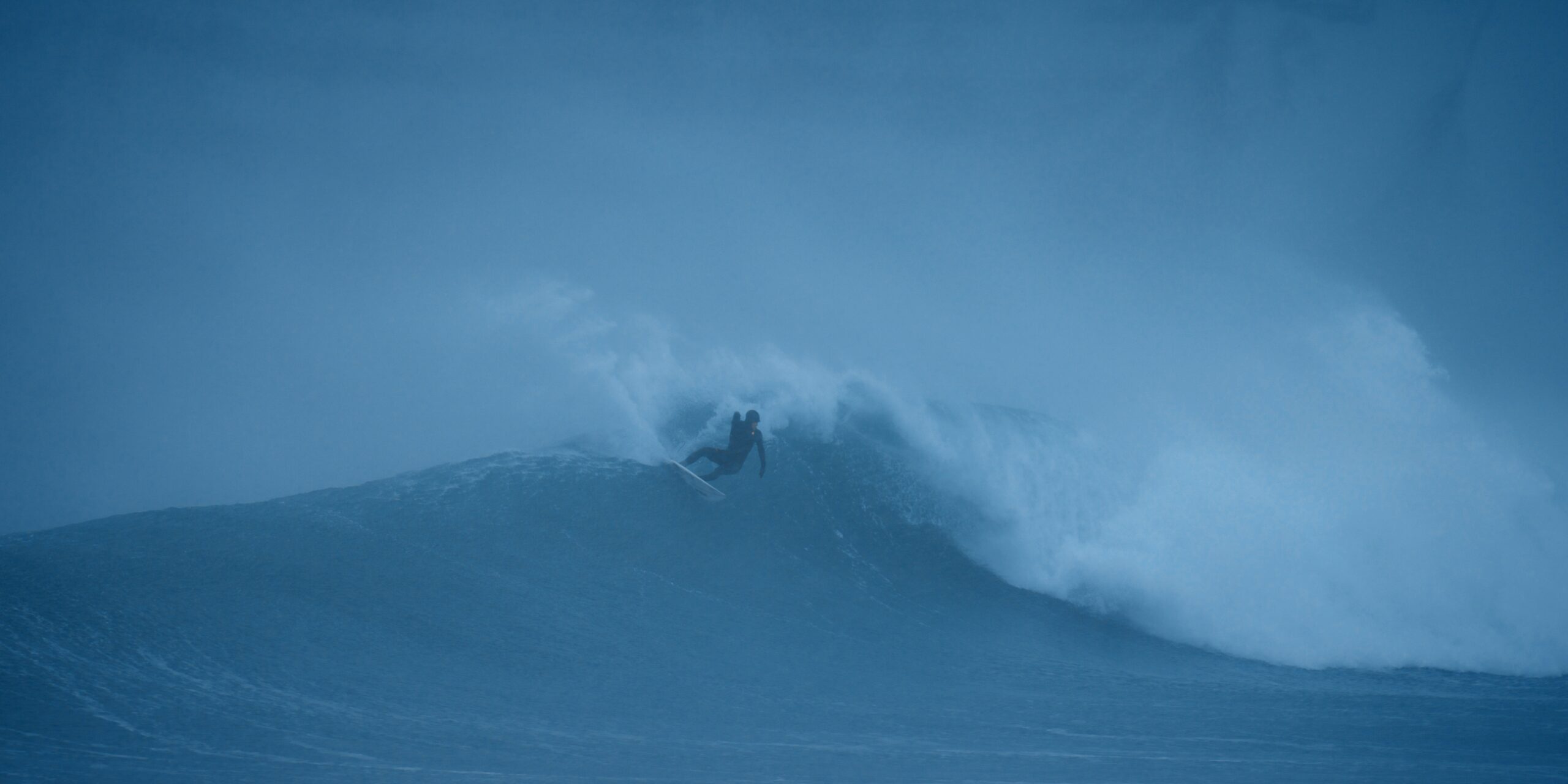 Ben Sturgelewski’s Creation Theory, featuring Pete Devries, kicks off 2023. Whether it’s the grandest cosmos or the smallest human idea, true creation arrives in moments of unexpected convergence — extraordinary synchronicities between space and time, science and art, music and mountains and sea. In Creation Theory, these raw elements converge in the Westfjords of Iceland, taking us on a journey from the interstellar birth of gravity and rhythm, to their ultimate human creative expression: surfer on wave, snowboarder on peak, and musician on stage.

The Impossible Wave by Jessica and Jay Johnson shares the journey of Fernando Aguerre’s 27-year journey to qualify surfing as an Olympic sport.  Jessica and Jay will be in attendance for a Q&A after the screening.

Rounding out the night, Savage Waters from Mikey Corker and Ghislane Couvillat is a stunning and intimate portrait of modern adventurers as they follow clues left in a 19th century treasure-hunter’s journal to find and ride a mythical wave in some of the most dangerous waters of the Atlantic.

Here’s the anticipated schedule for the night:

Submissions for the 2023 festival are open via our website here. 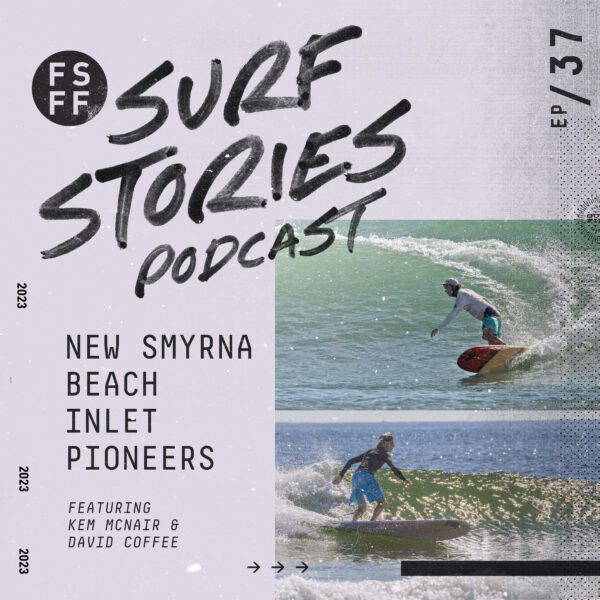 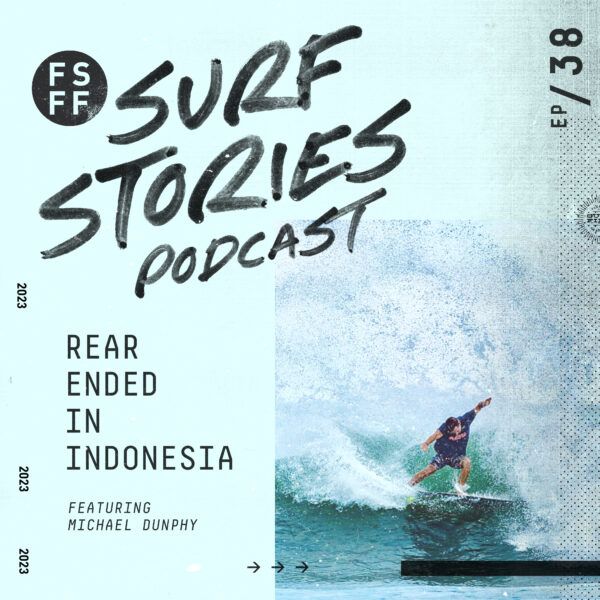 Tune in for a history lesson from East Coast Surfing Hall of Famer, Kem McNair, and New Smyrna Beach long-time local, David Coffee. They discuss Hobie sponsorship, trailing smoke from freshly resined fin, their first surf shop and board-building venture, near stardom in the music business, and the discovery of the best wave on the east coast of Florida.

Michael Dunphy, a professional surfer based in New Smyrna Beach, has been putting in the time. We have WSL alerts set for his heats. He’s committed, hard-working, and a hell of a nice person. We were lucky enough to sit down with him and cover the ins and outs of sponsorship, the nuance of life trying to qualify for the show, and the occasional unlucky parts of travel. Enjoy.

Find Surf Stories Podcast wherever you find your podcasts.  We are part of the Surf Splendor Podcast Network. 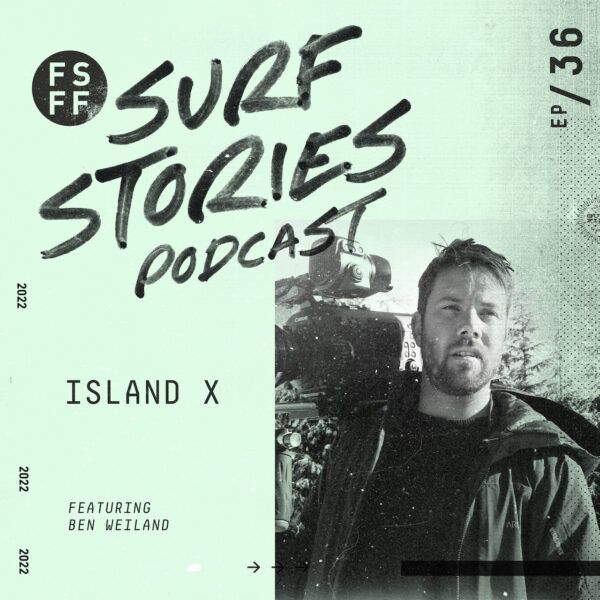 New Smyrna Beach, FL – NEW PODCAST:  Episode 36 – Island X with Ben Weiland – He holds three awards from the nine years we’ve run festivals. Island X won Best Surf Movie – Feature for 2022. Here’s a chat with one of our favorite people on earth, and a man who knows how to shoot a story and tell one. Being a good guest in a foreign country has its limits, but Ben muscled through some Faroe Island aged beef for your listening pleasure. 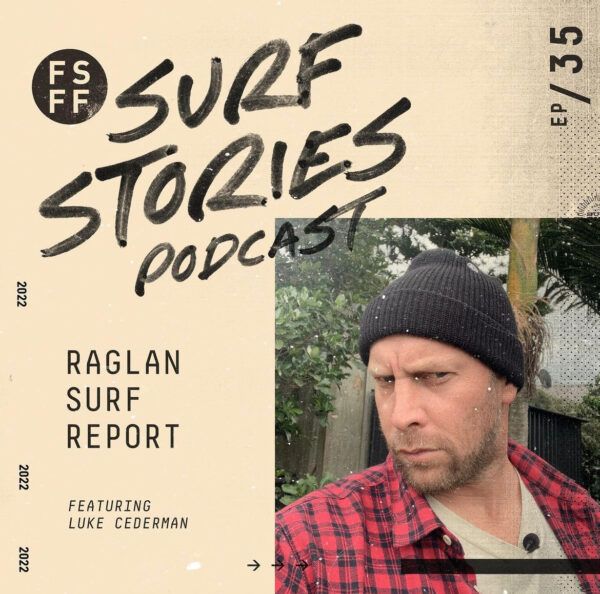 New Smyrna Beach, FL – NEW PODCAST:  Episode 35 – Raglan Surf Report with Luke Cederman – Your instagram feed will be better nourished by following Raglan Surf Report, run by Kiwi surfer Luke Cederman. Comedy is hard to come by in surf movies and TV shows these days, which is why you’ll find the clever parodies and satirical takes on our stupid past-time so necessary. Dry insertion of potent one-liners come sudden and painful, especially if you’ve engaged in similar thoughtless comments or acts addressed by his hilarious, pointed wit. If you have any interest in looking into the mirror Luke holds up, give this a listen.

New Smyrna Beach, FL – After over 7,000 minutes (111 Hours) of programming since our inception in 2012, we are happy to announce we’re entering our 10th year of the festival. On December 14, 2012, Kevin Miller showed This Time Tomorrow by Taylor Steele at Atlantic Center for the Arts with John Brooks in attendance, and we now have 9 years of festival in the books, and a podcast to celebrate all these folks called Surf Stories. Now, the fourth and final event of the 2022 Florida Surf Film Festival, presented by his Monster Energy, has concluded, and we are excited to announce the winners of this year’s awards.

One of the biggest rewards of the festival is our ability to host filmmakers and surfers from around the world, and this year did not disappoint.  We kicked off the year with the world premiere of Ben Gravy’s, For the Dream, an amazing night with an overflowing packed house.  Ben’s inspirational story is highly recommended. 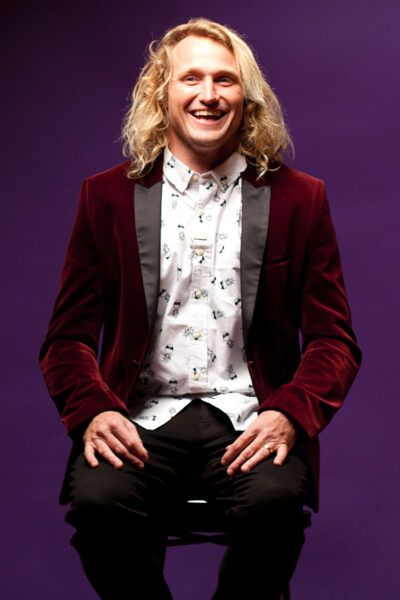 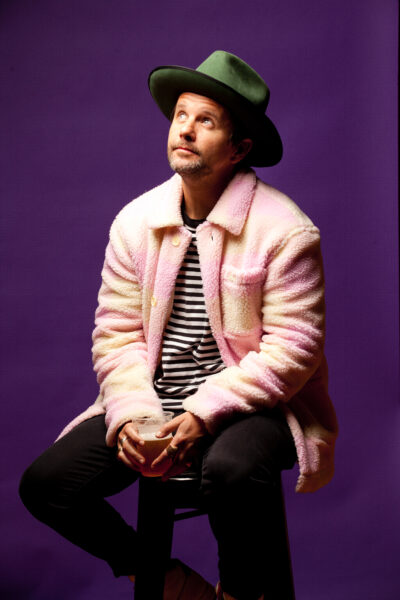 We also hosted Peter Hamblin and the El Salvador crew as they premiered Sweet Adventure and took home the coveted Viewer’s Choice Feature Award – Feature.  One of our favorite singer/songwriters Matt Costa dipped his toe into the filmmaking world and came out to the festival to show off his short film, Donde Los Terremotos, earning Best Soundtrack – Short and treating our fans to a private concert following the premiere.  The two Bens – Weiland and Gulliver came over in August and took home some hardware for their efforts with Ben Weiland’s Island X earning Best Surf Film – Feature and Ben Gulliver taking Best Soundtrack – Feature for his Documentary Hail Mary, featuring the life of fearless east coaster, Balaram Stack.  Floridian filmmakers Lauren Hill, Drew Miller, and Luke Khotera showed their work respectively and attended the August event.

November closed out the year with a truly unbelievable weekend with Hurricane Nicole making landfall one day before the event.  Western Australia’s pride and joy, Kerby and Cortney Brown, holed up with Kevin and John in New Smyrna Beach, riding out the storm.  We also hosted Argentinian filmmaker/adventurer, Jaoquin Azulay and presented his latest work African Territory (Part One).

Facing Monsters, directed by Bentley Dean, took home the Best Documentary – Feature and Best Cinematography – Feature, shot by Rick Rifici, and if we gave an award for most vocal responses to a movie it surely would have taken that as well with audible gasps in abundance as Kerby charges era-defining, heavy water slabs. 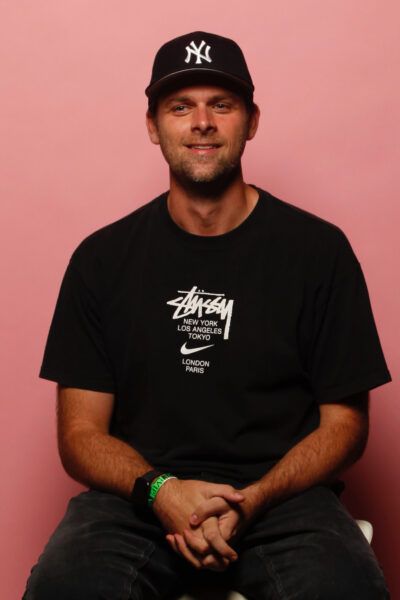 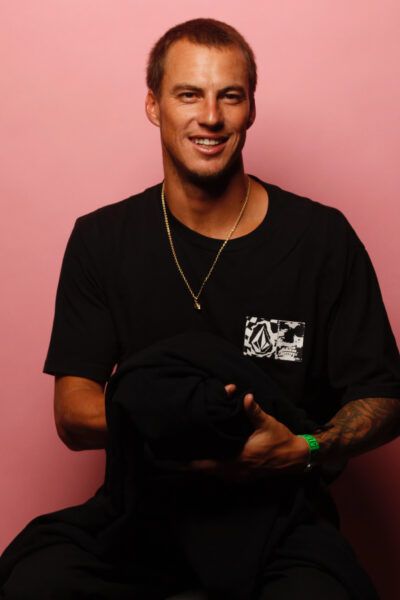 Here are all the winners for the festival year 2022: 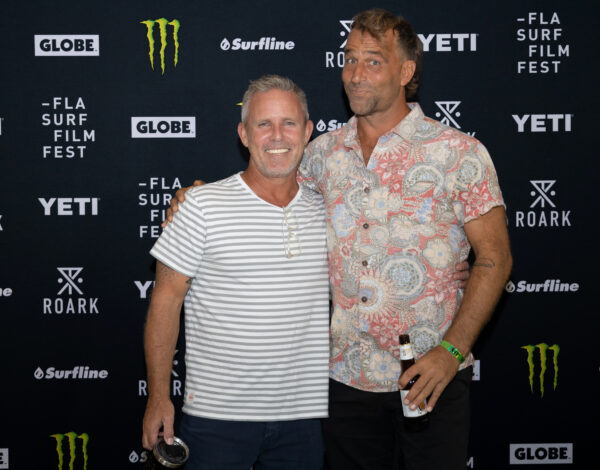 It’s been an incredible year, and there’s no way to thank all the producers, directors, cinematographers, and editors that put their hard work into these projects. Their stories are the ones we want to hear. Adam Steckley constructed our 2022 awards from a felled Floridian tree allowing our winners to take home a piece of Florida in their awards.

We recognize the difference between Best Documentary and Best Surf Movie. Those who approach the artform by documenting character, locale, etc. with personal interviews, historical footage, and anecdotal clips were in competition for Best Documentary, and those movies focusing on the high performance, action-driven sequences competed for Best Surf Movie. This award will be extended to short films as well. 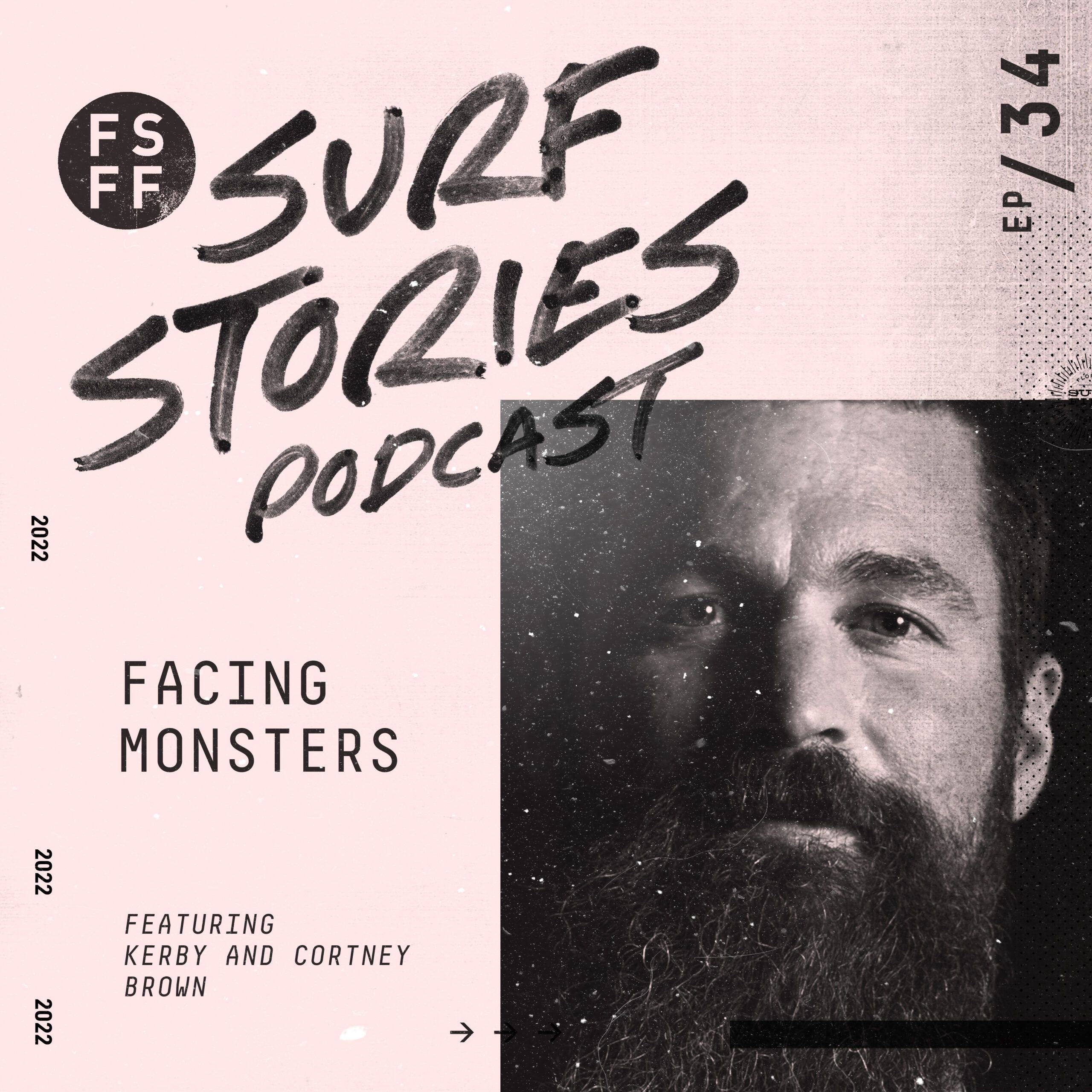 NEW PODCAST: Facing Monsters, winner of the 2022 Best Documentary and Best Cinematography in the feature category, just dropped online. Kerby and Cortney Brown joined us in Florida for a showing and a hurricane. We holed up in NSB, let the storm pass, paddled out, and had this chat. Find out what’s behind Kerby’s raw enthusiasm for slabbing piles of water pulling from shallow to dry surfaces. Hellman takes on a new meaning, especially in the face of parenthood. It’s complicated. Presented by @surfingsevolution 📷 @christianoehmke@surf_stories_podcast @spikeinitiative 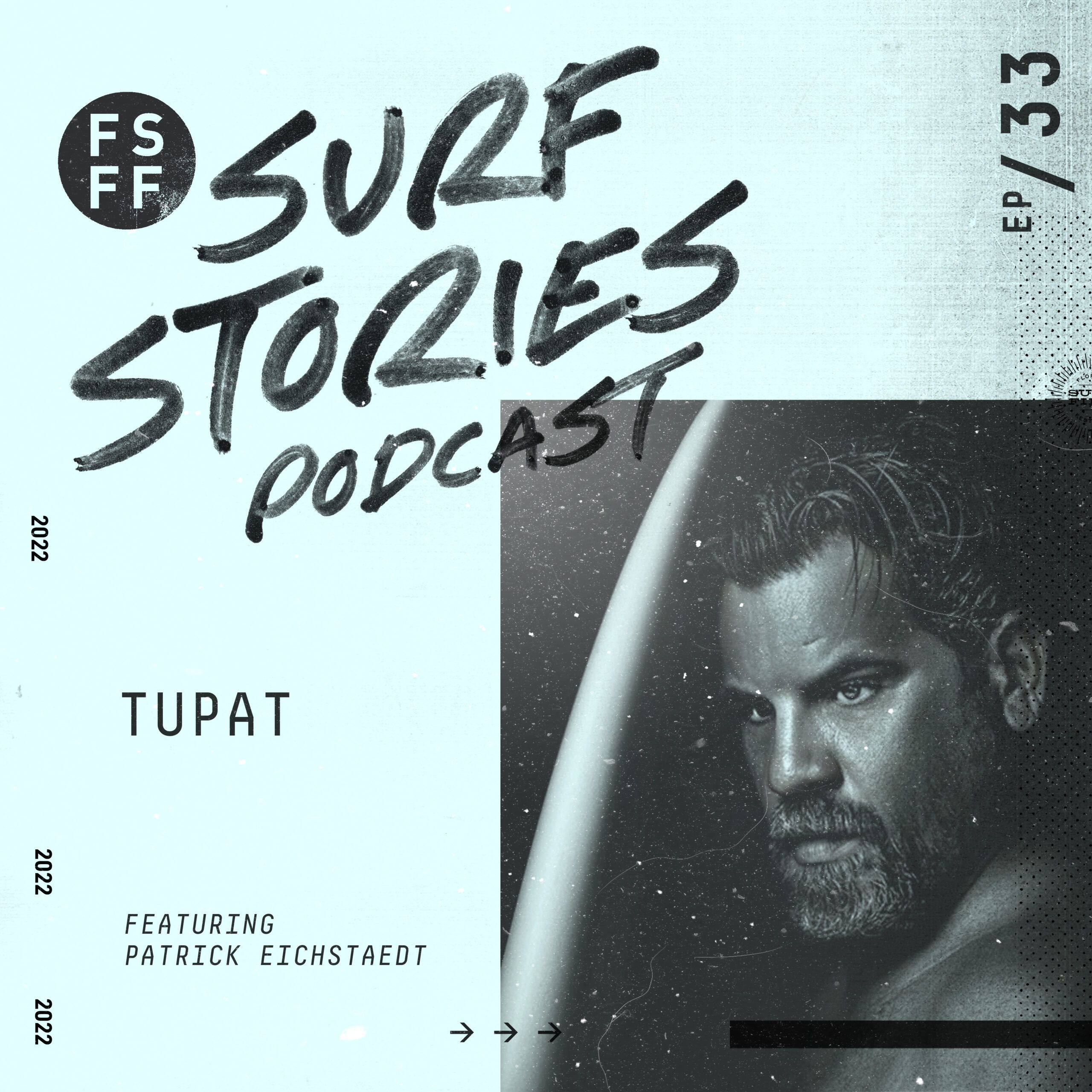 Patrick Eichstaedt has been shooting surfers since his teenage years and had enough foresight and passion for the art of filmmaking and photography to capture his friends, Andy and Bruce Irons, Aaron Cormican, and other east coasters for the early Lost films.  His immortal images continue to inform the early days of Andy, and his energetic spirit continues document the best. Poke’ sauce and more bear his lovable name… Tupat! 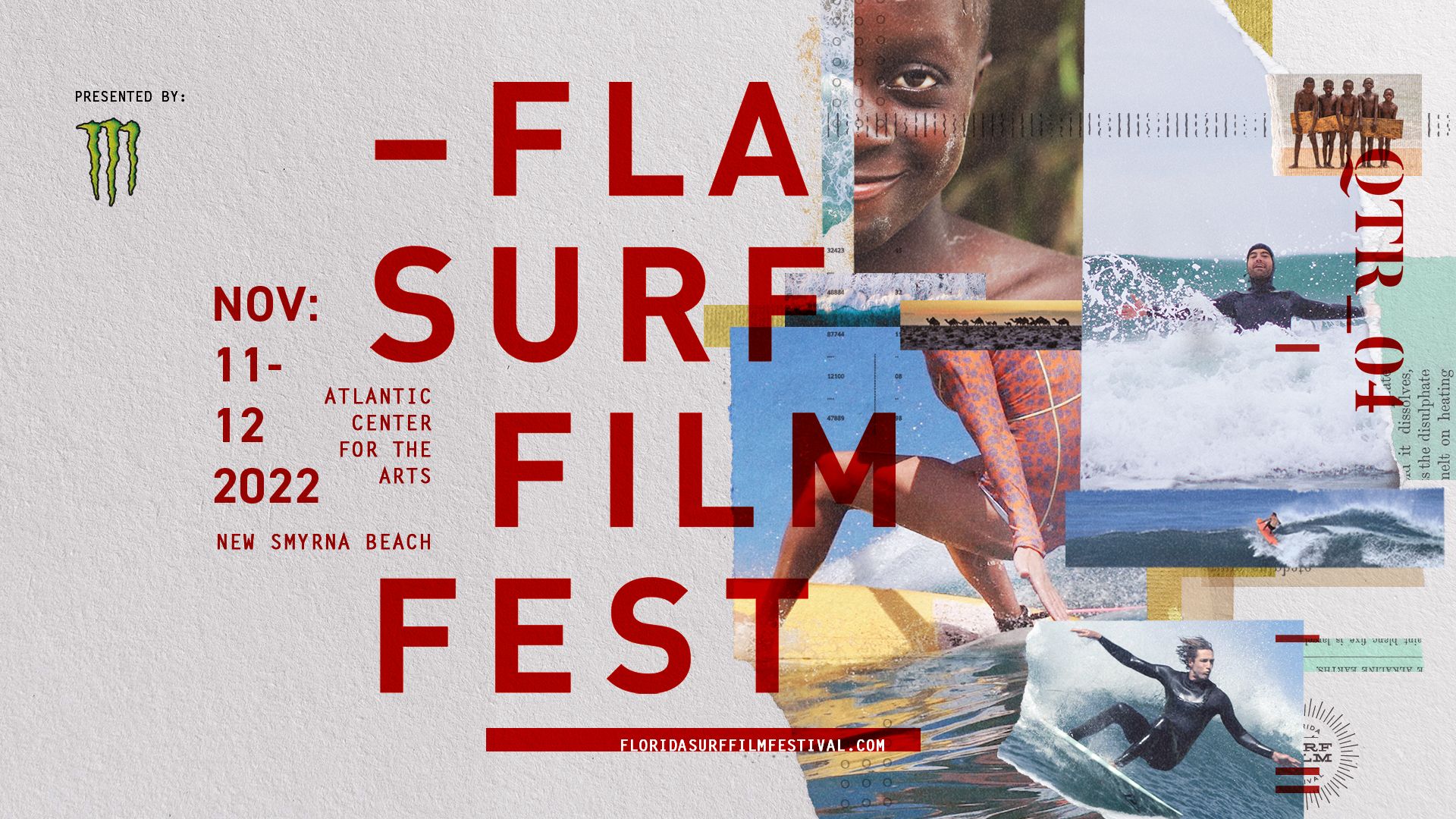 New Smyrna Beach, FL – The fourth and final event of the 2022 Florida Surf Film Festival, presented by Monster Energy, at Atlantic Center for the Arts is approaching with a couple of special nights of movies lined up.

On Friday, November 11, 2022, we’ll kick off the festival with Joe Alani’s Through the Doggy Door, a poignant look at the ascension of Hawaiian Sheldon Paishon from literal poverty and homelessness to his dream life as a professional surfer.  Under the tutelage of surf royalty Mason Ho, Sheldon overcomes every conceivable obstacle to realize his dream; his inspirational story bares the challenging, competitive west side of Oahu.  Joe Alani takes a hard look inside Sheldon’s childhood, where a pair of flops and a new pair of boardies meant the world.  We see Sheldon progress through young adulthood, navigating the minefield of life’s most vicious hurdles, finding much needed refuge in the sea.  Next, Facing Monsters by director Bentley Dean, offers an unapologetic view of West OZ hell-man, Kerby Brown, and his struggles with fear, addiction, family bonds, and his insatiable obsession to pit himself against one of nature’s most intimidating forces.

Our second night, Saturday, November 12th, opens with African Territory, following the co-directors, Joaquin (in attendance) and Julian Azulay, aka the Gauchos Del Mar on a twenty-two-month anthropological expedition from Spain to South Africa as they find cultural exchange and loads of surf throughout the endless continent.  For true surf-adventure travelers, you will not find a ride as daunting and deep into the heart of Africa.  Closing out the night, festival veteran Jack Coleman (in attendance) presents Natural High, featuring John Peck’s energy and solid alternative shapes ridden by the best, including Steph Gillmore, Derrick Disney, among others.  Once again, Jack knocks it out of the park with an amazing soundtrack.

Sprinkled in with the features are some amazing short films such as VONA, The Rider, The Rolling East and others.  Featured jurors in attendance include 4X World Champion Lisa Andersen, Matt Warshaw, Editor and Founder of The Encyclopedia of Surfing and Scott Hulet, Creative Director at The Surfer’s Journal.

It’s sure to be an amazing weekend of films and community engagement with Clancy’s Cantina and Café Verde suppling the food and New Smyrna Brewing Company and Solento Organic Tequila featured at our full bar.  Tons of giveaways and raffle items from our sponsors including Nixon, Dragon, Yeti, Globe, Creatures of Leisure and of course, a Craig Cronin Surfboard will be up for grabs each night.

In the 9 years we’ve been at this festival, Jack Coleman’s work has appeared on our big screen 5 times, and now, with the east coast premiere of Natural High, we’ll be welcoming him to New Smyrna Beach for his 3rd appearance.  He represents the core ethos of our festival.  Fun fact about Jack, he loves to golf…  We are humbled to have recorded this conversation.

We will be featuring beer from the fine folks @per

We will be outdoors tonight in the amphitheater so